What is the opioid epidemic?

Prescription opioids emerged on the scene in the 1990s marketed as a non-addictive, effective form of pain management. Physicians rapidly increased their prescribing habits (e.g. frequency and dosages) to meet the demand of long-suffering chronic pain patients. These new practices coincided with the development of new potent narcotics resulted in an increased risk for misuse and addiction of prescription painkillers which had never been seen before.

As the number of prescriptions for opioids increased, so did the number of opioid related overdose deaths. Since 1999, almost 750,000 people have died from a drug overdose, 2 out of 3 of those deaths involved an opioid. 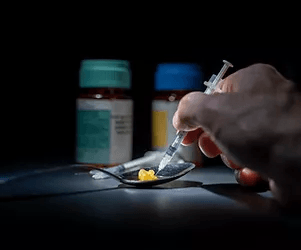 If prescription opioid users continue to use opioids at greater quantities and longer time periods than intended, they may begin to develop anxious hunger for these feelings of euphoria and relaxation leading to substance dependence. Psychologically, users crave the drug and want to consume it despite being aware of the negative consequences. Physiologically, the body experiences negative symptoms in the absence of opioids—a phenomenon known as acute opioid withdrawal syndrome.

Both craving opioids and fearing withdrawal often leads to taking more drugs than were prescribed, which leads to a tolerance. As tolerance develops, users’ brains become less responsive to the drugs and they seek out ways to hasten or enhance the desired effect. This includes taking dangerously higher doses, using different substances with “higher” impact (such as heroin), or employing different methods of ingestion such as snorting or intravenous injection. These behaviors indicate an escalating pattern of prescription drug abuse that may result in overdose death.

Opioids by the numbers

In 2018, we lost 46,802 Americans to opioid overdose; that’s one every 12 minutes. Even more alarming, 1 out of 3 opioid overdoses were from legally prescribed medications. Today, opioid misuse, addiction and overdose deaths has led the President to declare the opioid crisis a national public health emergency.

The figure to the left is a bar and line graph showing the total number of U.S. overdose deaths involving any opioid from 1999 to 2018. Any opioid includes prescription opioids (and methadone), heroin and other synthetic narcotics (mainly fentanyl or fentanyl analogs). Opioid-involved overdose deaths rose from 21,088 in 2010 to 47,600 in 2017 and remained steady in 2018 with 46,802 deaths. The bars are overlaid by lines showing the number of deaths by gender from 1999 to 2018 (Source: CDC WONDER).

People had an opioid use disorder in 2018

People died from overdosing on opioids